We're open 24/7 and ready to help you during COVID-19 with Sanitization Solutions.

Akron-Canton » Blog » Uncategorized » What to Do in Case of Biohazard Emergencies?

What to Do in Case of Biohazard Emergencies?

Published by SEO on July 29, 2021 in category: Uncategorized 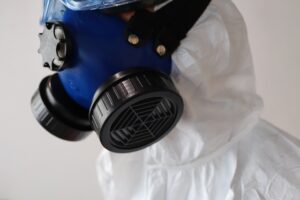 ‘Biohazard emergencies’ isn’t a phrase any of us want to hear on a regular day. However, despite the low probability, the chance of it happening does exist, and you need to at least be prepared for when it does. Knowing SOPs will help you ensure your safety and the safety of people around you.

On average, 320,000 people die globally each year due to exposure to biohazards at work, over 50% of them belonging to healthcare or social welfare sectors. Despite the numbers, most of us don’t know how to respond to a biohazard emergency. Since awareness is the first preventive measure, we have prepared a short guide to help you know more about the topic.

According to Merriam-Webster dictionary, a biohazard is “a biological agent or condition that is a hazard to humans or the environment.” Biohazards are common in fields that require biological work, especially with microorganisms.

Infected blood, bodily fluids, cell lines are examples of biohazardous waste and are considered a threat to the public.

There are several types of biohazards, some of which are listed below:

What Qualifies as Biohazard Emergency?

Following are some of the steps you can take to stay safe during a biohazard emergency.

In Case of Spills

If you encounter a biohazard spill, follow the steps mentioned below:

Once you’ve cleared the contamination, discard your coat, eye protection, and gloves. Immediately move to a space where you can shower and try to get a fresh set of clothing arranged as your current clothes may already be contaminated.

Shower for at least 15 mins, clearing your eyes, nose, and face thoroughly. Once done, get a medical check-up, just to be sure.

In Case of Exposure

Exposures refer to coming in contact with the biohazard waste directly. If you may have gotten exposed to a biohazardous waste, you need to take the following steps:

Overall, a biohazard emergency can be a daunting experience, but you have better chances of coping if you know the protocols. We hope this article prepares you for responding to a similar scenario.

If you encounter a similar situation but do not have the necessary materials, stay away from the area and call 911 Restoration. Our technicians are trained experts and will follow all necessary procedures to secure the spill. You can contact us by calling at (234) 235-6624 or clicking on this link.